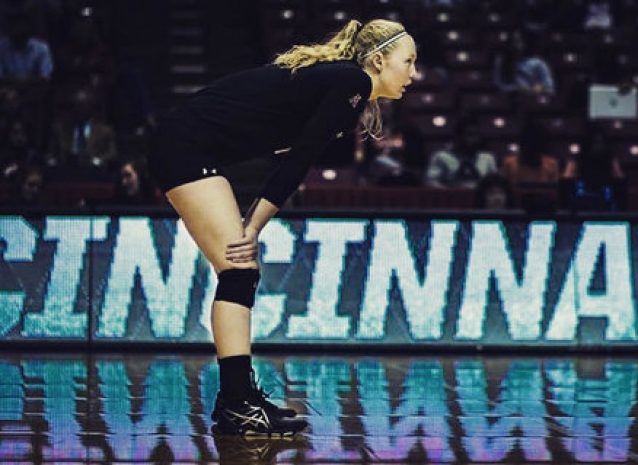 Abby’s shares how she had always been an understated player but she used that situation to work hard and find other ways to contribute to her team like leadership.

Here is an overview of my life. It hasn’t necessarily been a super hard life like some may have had. In fact, I felt very privileged in a humbling sense though I really had to work hard, especially in volleyball. I started playing volleyball as well as basketball around 3rd grade. Fast forward and as I entered 8th grade, I turned into one of the best players in the city and then focused only on this sport in High-School. Though a bit smaller for my position, I didn’t give up from what I wanted to do, and that was to be a great player. We won a State Championship in High-School, but I seemed to be an understated player only being recognized as an Honorable Mention. I was then recruited by University of Cincinnati to play volleyball as a walk-on (scholarship for years 3 and 4). Even though I didn’t have the physical presence as well as being a power hitter (direct kill shots), I was still a decent player. However, when I showed up at camp, it was a wake-up call as I realized just how good everyone else was. I was again, this understated player, but I already knew that. Even though I lacked skills as a player, I looked to find other ways to make up for them. I would encourage my teammates both on and off the floor and help them in any way I could. I was that teammate that others looked to for guidance and leadership on and off the floor. I wanted to be the very best teammate possible.
My position at UC was libero (defensive specialist position). This one particular year I was the starting libero but as soon as the season began, I was taken out and replaced by another girl. I continued to be that same understated player, and that was frustrating. With an injury and few other changes, I was put in the game as starting libero in a tournament and I played out of my mind. I wanted to prove others wrong and did anything I could as well as continued being a great teammate and leader to all. This tournament I played in was against Colorado State who was ranked 20th in the country. They had this 6’ 5” girl who was a great player and we weren’t expected to even come close. We ended up winning this game, as well as the whole tournament and I was chosen to be on the “All Colorado Team” because of my play. I ended up starting the rest of the year as libero. Instead of complaining, being mad and frustrated in life as a student athlete, I chose to find other ways to contribute. While realizing that I was never going to be an amazingly talented volleyball player, I decided to be the best teammate which then allowed our team to gel and that is one of my Check Your Game moments.

Advice in Sports?
I would say that no matter how understated others see you, prove them wrong. I took it upon myself to go directly to the coach and ask what I needed to do to earn a starting spot. I also did extra reps as well as had a new kind of focus while in practice. I simply went the extra mile whenever I could.
Advice in Education?
One thing I’d say is to not give in when people tell you that something is not going to work. For me, I went into a biomedical engineering major and changed to industrial management. Even though my major would sometimes be in competition with my sport, I made the decision to make a choice based off of what I wanted my future to look like as opposed to what was easier for my sport. In the Summer, even though it wasn’t easy for me to have internships because of the volleyball schedule, I still had one 3 out of the 4 years.
Advice with peer pressure?
I never gave into peer pressure because I constantly surrounded myself around good people. I also never put myself in a situation where I would be taken advantage. These are the keys to success in this area. It was a Gigantic game changer.

Abby, as I listened to you tell your story, it sounded so similar to what many athletes experience when they go to the next level. Whether or not someone is entering the 9th grade or if it's their first year playing a college sport, both those groups of athletes get a wake up call pretty quick! I'm sure there were many frustrating moments during your time in college and I'm glad that you figured out how to take your situation and turn it into a positive one. When you understood you needed to get better, you asked the coach and worked hard in those areas. When you realized you would never be the MVP on the team (other than the Colorado State weekend), you then took it upon yourself to be the best teammate. You became a leader with your team as you encouraged, helped and tried to make a difference with your teammates both on and off the court. I can tell you this, the fact that you became this leader on your team I know that you were able to affect more people than if you simply were the MVP and just thought about your own needs. This is what Check Your Game is all about in sports and in life. You acknowledged areas in your life that needed attention and you took action. Thanks again for sharing your story and I know you'll be an encouragement to others and that includes myself. -Gary Rogers