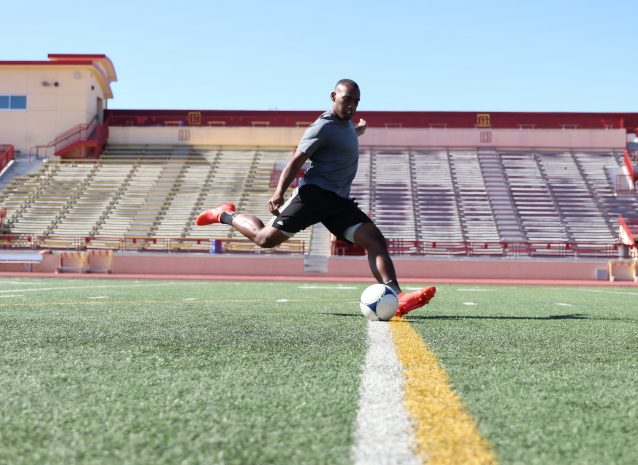 In this story, Amobi shares about a time when he was cut from a soccer team and used that as his motivation for his future!

Topics: Believe In Yourself, College Athlete, Getting Cut, Never Give Up, Professional Athlete, UCLA

My story I want to share takes place when I was in Residency and I was trying to make the U17 team for the World Cup. I was playing a year up which made it even more of a difficult task to make the team of 25 players. Our team had just finished a qualifying round in Germany and we were all chilling in the airport as we were headed back to Florida when I saw some activity that was about to change my life. I was sitting there quietly and noticed my coach was slowly approaching kids and tapping them on the shoulder. At first glance, I didn’t know what was happening, but as I saw him tapping some of the players, I knew were most likely not the core group from the team, I realized he was cutting players right before our flight took off. Feeling uncertain and a lot of stress, I did what any kid would do and that was, I acted as if I was sleeping so time would pass as if all this would just go away. It didn’t work! Soon after I was pretending to sleep, I too got a tap on the shoulder and acted surprised as if I was waking up. Our coach took me away and told me a few things about how good I did but ultimately told me I was being cut, though I would be an alternate player (26th). There was nothing I could do to change the current situation and I remained emotionless whereas others I saw cry. This wasn’t easy for any of us and we all took it differently. During this time, I did sneak in a call to my parents though. My Dad told me that I did all I could do and said that as an alternate, I had to remain calm and that he would talk more when I returned home. My flight back to Florida was long in theory but as I went through all that had taken place just an hour ago, the flight seemed to last an eternity. What just happened to me was heart breaking and I couldn’t showcase myself to the world. This took me awhile to overcome but it provided a great motivational tool for me in the coming days. From this day forward, I became “locked in” and focused my efforts on my weaknesses and never gave up. A year later I went on to make the U18 squad and was then moved up to the U20 squad where I was much younger than the rest of the kids. I would go to practice early and stay late. I would make sure my studies were finished so they wouldn’t interfere with me going to games. I did all that I could to prove others wrong and that is my Check Your Game moment. In the coming years, I got a scholarship to attend UCLA where I played only one year before being drafted by Philadelphia Union(MLS) and am currently playing for Austin Bold (FC) as of 5/2/19.

My Dad has always told me something that has stuck with me and that is, if you give your all to the best of your abilities, then good things will happen. Things may not be how you envisioned it, but your situation will probably be much better.

Amobi, I just wanted to say to you that even though I don't know you well, I already know you are a really good guy. I know you may have flaws and aren't perfect like most of us, but what I find so intriguing is that even though you are currently playing professional soccer (5/6/19), you always have acted as if you're no better than others. When I set an appointment to talk, you always pick up and your word is honored with your actions. This is the first thing that I loved learning about you as a person. In regards to your story, well I can imagine what that was like to be sitting there in the airport watching the coach tap players on the shoulder. I can relate because on the last day of cuts when I played football, instead of watching the coach, I was listening to the player personnel knocking on different doors that were around me and pretending to sleep didn't stop that knock on my door either (wasn't the end for me though). It isn't easy for anyone playing sports when we get to a level where a certain amount of players are selected whether it's on an AAU team, in Middle School or as a professional athlete! The best thing about your story is that you didn't allow that situation to make you quit going after your dreams. You used this as motivation like many others to motivate you even more. You went to your coach and asked what you could do to get better, you spent more time at practice and you even worked on your studies so there wasn't anything that would hinder you from doing your best in soccer. Check Your Game isn't just acknowledging that there is work to do, but it also involves a second step and that is to take ACTION! For those kids who have gotten cut or maybe you are on a team but not happy with how much you're participating, don't just sit back and do nothing about it. Do what Amobi did with his situation. First of all, don't give up if you want something bad enough! Ask others what you can do to get better and then go and TAKE ACTION! I can promise you this, that when you do these steps, you will truly know that you are giving your best and no matter what the outcome, you can feel good about yourself! Thanks Amobi for your humility and transparency with your story. I know you'll be an encouragement for others. -Gary Rogers

YOUR COMMENTS ARE POWERFUL!