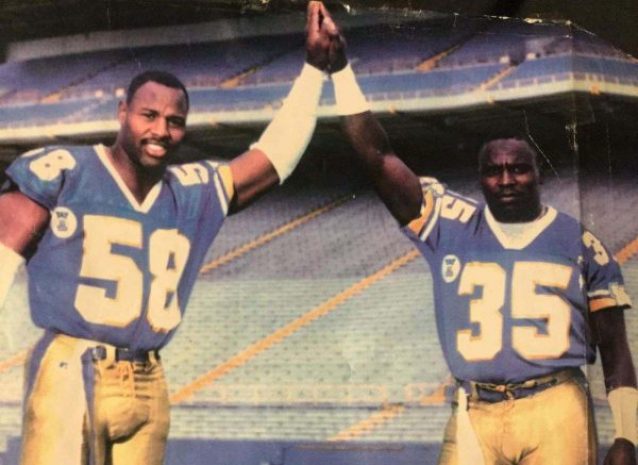 James West shares how God continued to tell him to pursue football even after getting cut in College!

When I was 13 years old, one of the most devastating things happened in my life. My Dad died. Nothing compares to this, but it was preparing me for what was going to take place in the years to come. I had always played sports growing up but failed miserably at them in High-School. After graduating, I was either going into the Military or was going to attend College. I decided on Texas Southern University and decided to try out for the football team where a few friends of mine were a part of the team. These guys helped me to get a tryout that first year and after 3 days of practice I was cut. I don’t know if I call it devastation or just a blow to my ego, but I felt the pain of losing something again. I remember being on the bus afterwards and the Lord told me to not give up. The long and the short of it though is that I tried out the next year, made the team and the rest is history. I ended up playing 12 years of Professional Football and along the way have been a Division All-Star, CFL All-Star, multiple Grey Cup Champ, Most Outstanding Defensive Player of the East, Winnipeg’s Hall of Fame, and in 2016, The Canadian Football Hall of Fame Member! I never gave up and persevered. There are 2 Check Your Game moments to my story. The first one was getting cut before I made my College team (btw, I was cut by the Raiders and the Cardinals right after College). My second Check Your Game moment was even more significant. I finally began to listen to what God wanted me to do in life. I started to listen to God with all things in life such as something as little as stubbing my toe, all the way to the time that God told me that that I’d be putting on the shoulder pads for the last time. Though I didn’t like it when I was told I was suiting up for football for the last time (I thought I could play until I was 40), I knew that God was in charge. After leaving the football field as a player, I continued to work in sports as a Coach and eventually getting a job in FCA where I currently work, and I still listen to God’s voice for direction. It’s always the best choice.

Thinking about what advice I’d like to share brings me to the topic of relationships. The first thing that comes to mind is that we need to honor others more than we honor ourselves. Too many people are thinking more about themselves these days instead of looking to develop relationships and think of others. Just a small example that I see today but one that is prevalent with kids on campuses today. I see kids walking all over the place about to go to class and have earplugs in. How are you supposed to learn and communicate with others when that sort of thing is happening? It can’t. The second piece of advice involves relationships also. People need to find others that have similar ideas as you and I’mnot just talking Faith. It’s so important to surround yourself with others so they can help keep you accountable in life. I grew up always thirsting for something else. Another temporary high in life until I found some good people that would have real conversations with me that would keep me accountable. A true friend will tell you what you may not want to hear, but what you need to hear. Others will tell you just what you want to hear but more than likely isn’t good for you. Go and search for true relationships and have real conversations as opposed to keeping the earplugs in and thinking about your own needs.

Thanks James for sharing your story, advice and wisdom from your life in order to encourage others. Though you experienced some tough times from losing your father to getting cut in College, you still didn't give up. Great job and great lesson for others. As I'm learning more about you, I'm also discovering how you and your partner in crime, Tyrone Jones (#35 in picture as well as 1984 Grey Cup Most Valuable Player) were a force to be reckoned with. It sounds like Tyrone was a great player, teammate and friend and I'm honored to have learned about him. You both were great players but out of all the accolades and achievements on the field that you could've shared within your story, you chose to share something that took place after getting cut after your College tryout, and that was to listen to God. He told you to keep going! God loves that you listened and has allowed you to have a great career in football and now at FCA. Thanks again for your story and I look forward to your continued success. Gary Rogers