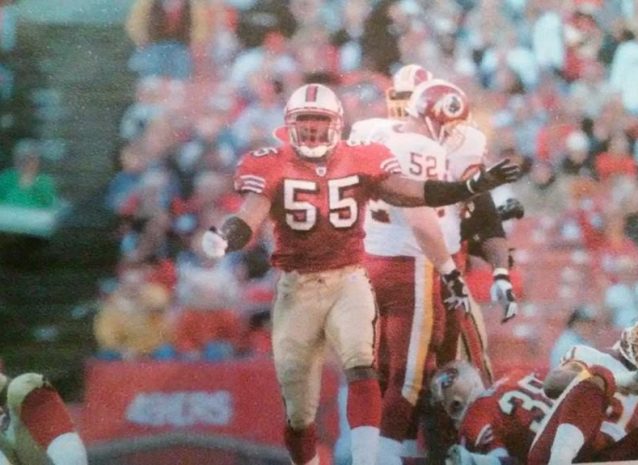 In Jamie’s story, this 10 year veteran in the NFL shares how about how changes and decisions in his life led him to a place of humility that put him on a better path in life!

I’m from the back woods of Wetumpka, Alabama which is central Alabama. I was an only child and never knew my father until just last year at age 39. My mother struggled with addiction for quite some time but is now been Drug free for 2 yrs and counting. She is and has Always been my biggest supporter. I attended high school in Texas and Alabama ending up at Wetumpka High School my Jr and Sr year. I earned a scholarship to Vanderbilt University where I earned several honors including All-American while leading the SEC in tackles 2 yrs straight. Those performances allowed me to be Drafted 2nd round to the 49ers. I was so excited but this is when life became a huge challenge. Like most people that come from small living I wanted to party and shine on the field. I did just that and had a pretty good career. I even recovered from neck surgery leaving me with a metal plate and 4 screws permanently. I actually won the Ed Block Courage Award and lead the 49ers in tackles the next year. I played 10 yrs in total and everything seemed good. I had 2 daughters and was married at the time of retirement. Life was good until one phone call changed everything leaving me with a list of felonies and a series of arrests. This was terrible but was then followed by Divorce and being diagnosed with Rectal Cancer. My Cancer required radiation and chemo with surgery of a colostomy bag now removed. This changed my life completely physically and mentally. I began to question God and became a angry person. I was thinking, how could you let me go through divorce and Cancer all at the same time. All I ever wanted to do was raise my kids in a 2 parent household, something I didn’t have. I began to party all night, multiple nights at a time all while still being an excellent parent, but I was entering a world that’s no good for anyone. I was totally running with the thugs of the city and the wrong type of people. I felt close to them because of feeling alienated from my goals in life. With me having Cancer, Divorce and in trouble with the law for idiot decisions, I was living a tough road to nowhere in life. I had a great run at it until it landed me in jail, then in a Drug program for 7 months. I was upset because I didn’t think I needed the program. Boy was I wrong. I’m not a drinker but I entered a AA program which made no sense at all, but ended up being the best thing to ever happen to me. I began to look at myself deeply and my past situations closer. I realized that I was hurt from several factors of my past and current situation. I had to learn how to move on and be humble in all situations. Sounds easy but I didn’t know the true meaning of humble nor what to be humble for. I eventually had to practice my new way of thinking which wasn’t easy. It took riding the bus, train and walking for months. I also realized that I’m not as important in this life as I thought. Life is about helping others and love while I was focused on accomplishments of life. When I humbled myself and gained more patience, I started to become the man God wanted me to be. I’m not the biggest religion guy but I know 1st hand that God is in control, not me!! I had to live the life he wanted for me and to serve Him. This is now more important than anything else in my life now. I’m a small part in this huge world. All I can do is be the best person I can each day moving forward. I still attend AA/NA meetings to this day. They help me stay grounded and I enjoy being able to help those in need.

I would say to be humble. Focus on being a better person everyday, one day at a time. It’s not easy, but never give up. There will always be challenges in your life but how will you deal with them? Will you let a bad attitude ruin all the glory waiting for you? Your attitude is the one thing you do have control of in your life!! Don’t be afraid to talk about your feelings and situations of life. Trust me, you will never be the 1st nor the last!! So stay positive and know that God has a plan for you. It doesn’t always feel that way, but have patience and you will look back and say, that guy Winborn was right, you feel better when you're working in the right direction in life. That direction I’m speaking of is working on yourself as a person and putting all the negative bad things of your life BEHIND YOU. You can rebuild a motor to a car and that’s exactly what we have to do as Human sometimes. Tear it down and Build it Better and enjoy the simple things of life!! One day at a Time!!

Jamie, first of all I wanted to say thank-you so much for your transparency! It's not easy to talk about some of the things you shared but you did! The word transparency also goes together with Humility! I can really sense that there was a time in life when all things went wayward and you got on this new path of thinking less of yourself and more for others! You can't fake humility! I think that is what I love hearing from you and sensing from you as well. I think most people would rather be around a humble person than not! Your story has so much going on Jamie, it's hard to know what exactly to tell you other than, Great Job making a decision to get on a new path in life! It obviously took some tough times (divorce, cancer, jail) to open up your eyes, but YOU still had to decide that you would change paths (Check Your Game) and you did! I'm hoping to continue to stay in contact with you and will help you in any way I can if you need it! Thanks again for your story, your humility and your desire to go down the Right Path! Gary Rogers

Scroll down to section saying “Leave a comment” in order to encourage this individual.