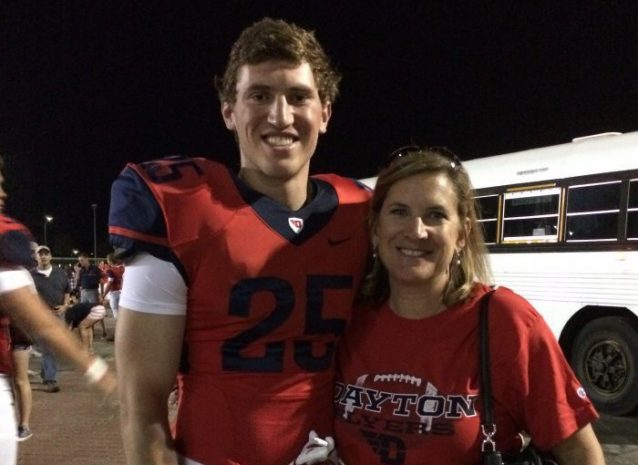 In Johnny’s story, he shares how he went from the verge of quitting football his Sophomore Year, to taking his team to the State Final Four the next year and eventually playing Collegiately at the University of Dayton.

Topics: Ask for help, Humility, Never Give Up

A significant moment in my life occurred in the summer going into my sophomore year of high school. My freshman season of football was a disaster, and I absolutely hated it. I wanted to quit and had been thinking about quitting for a long time, but I wasn’t going to until I had at least talked to one of the coaches. So, one afternoon I met our Offensive Coordinator and JV Head Coach, Brandon Sammons, at the high school. I explained my frustrations and how I was going to quit. Finally, I offered to play Quarterback because I knew the JV team was in need of a guy heading into next season. Coach Sammons gave me that opportunity. I had a great sophomore season on JV and even made it into a few varsity games where I scored a few touchdowns. Heading into my Junior year, I was faced with a battle for the starting quarterback job against a rising Senior. The odds were already against me being a younger player and having only one year of experience at the position, but I knew I had to work harder than I ever have before. I won the job. I helped take our 2014 team to the State Final Four that season while making lifelong friends and memories. During my senior year, I received 5 Division 1 College Football offers at the FCS level as well as being nodded 1st Team All-State. I accepted an offer to play football for the University of Dayton Flyers. And to think I was going to quit football 3 years prior…

"Those who stay will be champions." This quote comes from Bo Schembechler, former coach at the University of Michigan. When times are tough, if you stay the course, you will become successful and you will accomplish a great amount during that time. My advice would be to never quit and never give up something until you have at least tried it. Even though the grind and the days are long and tough, it will be worth it in the end. There are always people around you supporting you and believing in you. I felt like quitting football in high school, until i talked to my coach. I ended up having a high school career better than I could've ever imagined which ultimately led to 5 Division 1 college football offers. In the middle of my first fall at UD, I felt like quitting. I could've easily quit, but I did not want to let those (who were supporting me) down. I felt a great sense of accomplishment after my first college football season.

Johnny, thanks so much for sharing your story. The first thing I think is important for others to see in your story is that you just didn't quit! You went to Coach Sammons and talked about it. A lot of times in life, we need to work things out as opposed to just saying we're finished. The second part of that scenario I really like is how Coach Sammons helped you find a solution to continue playing football. Coaches, parents, teachers and others who have been through life a lot longer than most kids have an important role to play in the lives of these young kids and it really matters what we help encourage or don't encourage. I'm excited that Coach Sammons helped you continue to participate in your sport. You went from the verge of quitting to the Final Four in the State Championship the following year, to then achieving First Team All-State Honors. Wow! Those accomplishments and honors are all amazing! Thanks for sharing and congrats on your opportunity to play at UD. Lastly, for those kids out there who are reading your story, I hope they'll be encouraged by your story and your advice, "Never quit until you've at least tried." Thanks again Johnny. Gary Rogers