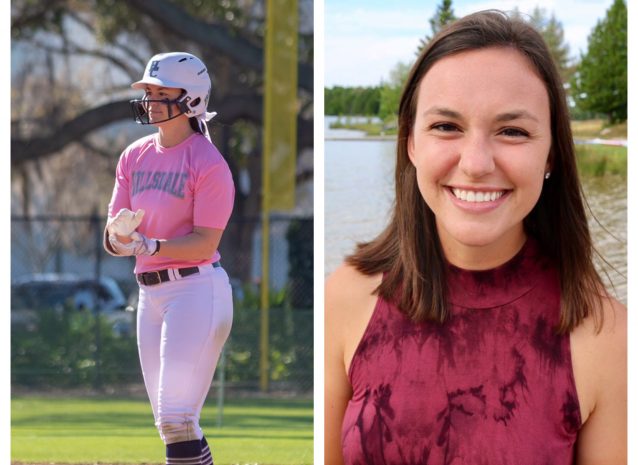 In Katie’s story, she shares about her identity before and after she decided to put God first. For those that are having trouble finding contentment in life, Katie’s story is for you!

As I reflect back on my years in high school, it all seemed to go pretty well, at least from the outside looking in. I always was at the top of my class, was a three-sport athlete, all-state in softball, and homecoming queen my senior year. But little did others know, there were a lot of hardships that I was struggling with – specifically the burdens of consistently falling short of good enough for my friends, boys, and even family. The hardest was sophomore year when these burdens led me to struggle with depression. There were many times that I would lay in bed and wish that I didn’t have to get up. I never considered hurting myself because I didn’t want to do that to my family, but if there were an option to be done with life, I definitely would have chosen that. I believed there was a God during this time, but I was not following him. I did not know what it meant that he loved me.

My next chapter of life was spent at Hillsdale College where I continued my softball career. I continued to work hard in school and in softball, as I also continued to be consumed with my image, grades, and batting average. What was different was that I was no longer the top of my class or the best on my team, which caused me to be a big ball of stress my freshman year because I felt like I was not living up to the image that I had worked so hard to create for myself. I worked 110% all day every day trying to prove myself and earn my spot on and off the field but was now just was average in every category, leading me to be incredibly burnt out. When I wasn’t playing sports, I participated in the party scene with underage drinking. I also made poor choices with a boyfriend of mine. There was a Christ-shaped hole in my heart that I was trying to fill with everything but Christ, and believe it or not, nothing was satisfying me. I was spiraling slowly but realized soon that the Lord was convicting me of my lifestyle that would soon change. It was on September 22nd in the year 2016 that I fully surrendered my life to the Lord. This was an incredibly transformative day and time of life for me. I finally understood the entirety of the gospel – what it means to be loved by the God of the universe who came, lived, and died so that I don’t have to and so that he could have a relationship with me. For the first time, I understood what it means to orchestrate every aspect of my life around Christ and not compartmentalize the parts of my life that I would give to him versus keep for myself. This left me on fire for the Lord. As I continued life fully walking with Jesus, I broke up with the boyfriend who was no longer a good fit and said no to underage drinking, while still attending parties. These changes I made opened up many conversations to share Christ with others. I was a new creation in Christ and my identity was no longer in who I was as a student-athlete. I was now a daughter of God. My value was found in the Truths that He said about me – that I am cherished, valued, and worthy of love.
With these changes during my Sophomore year, I finally felt free from being enslaved by grades, batting averages and relationships. In my sport, whether I won, lost, got a hit or not, I could still hold my head up high and glorify God through any outcome. I did this by loving my teammates well, supporting them, and cheering them on even if I was frustrated with my own performance. By having a good attitude even amidst my failures, I was ultimately able to bring glory to God. Even in the darkest valleys I could honor God – one for me included a major injury. In the winter of 2016, I got a stress fracture in my back from squatting. I honestly thought I’d never play softball again. In the past, this setback would have seemed like the end of the world, but now I could say, ‘Lord, not my will but your will be done’, hold my head up high, and be confident that God’s plan is better than my own. It was pretty miraculous what happened and ultimately, I was able to get treatment and was healed. I played that next season and even made 1st Team All-Conference.
When I look back on my life, there were so many amazing results that took place after I put my trust in the Lord. In softball as a Freshman, I hit .330. That average climbed to .380 my Sophomore year, .480 my Junior year and settled to .410 my Senior year. I even received All-American Honors my Junior year. In school, I struggled as a Freshman and could only attain a 3.3 GPA. The last 3 years though, I got a 3.8 GPA. With my relationship with the Lord, I was able to study easier and practice better. I had a newfound freedom that allowed me to accomplish some great things on the outside. I was also amazed at how I felt on the inside. During my Freshman year, I had no Peace in my life. Since Jesus entered my heart, I have Peace. I don’t feel pressured and don’t feel that I have to control everything in my life. I still work hard but leave the rest up to God and trust that He will take care of me.

I shared about a time when I was in High-School with depression. When I look at the source of the depression, I realized that it was because I didn’t feel that I had worth or value. I didn’t think that my existence in this world made a difference to anybody. My family and friends loved me but I really didn’t feel that. I felt as if I was just a burden to the world. My identity was wrapped up in the wrong things. Now, my identity is that I am a child of God and that I am loved by the God of the Universe. I now live my life for the One who gave His up for me. My advice would be to not just know about God but invest time and really get to know him and put your trust in Him only. Today I am living my best life by putting God first, others second, and myself third.

Katie, your story reminds me of myself and many others where our outside looks way better than our inside. Just like the saying goes, "don't judge a book by it's cover" is what I was thinking when hearing your story for the first time. Many of us look good on the outside but on the inside, we're miserable! As I get older, I realize just how many people are in your same shoes. Yeah, you made better choices in life, but that was because of a much bigger choice in putting your trust in God. You are a great young woman who dealt with a lot of difficulty when you were younger but I'm so encouraged that you discovered a better way to live and are sharing it with others. Thanks again. Gary Rogers