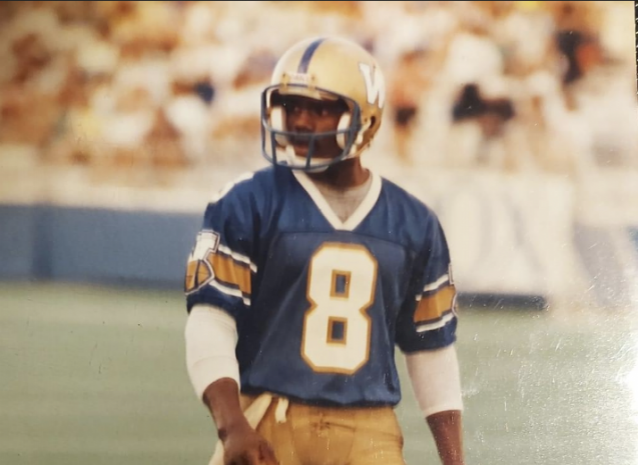 Overcoming obstacles seems to be the common theme with Larry’s story. He made the CFL at age 19 and continued playing for a total of 12 years but it wasn’t an easy road; especially after getting shot in two places.

I have many stories over my 12-year career of professional football but want to share just a few that relate to Check Your Game and what the business is all about.  I grew up in California and playing sports was something I excelled at. Though I share mainly about the football side of things, it was really baseball that was my better sport (didn’t play it after high school). 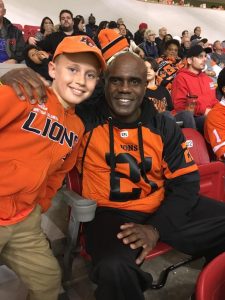 #1
Everyone knows, or most of you know Jerry Rice! He was a great receiver who played with the San Francisco 49’rs. I was an upcoming Senior when Jerry was talking to media about breaking Gayle Sayers’ record of 22 touchdowns in a season. Though I just had a 10 games season as I was a Senior in high school, I was motivated to break that record. Accomplishing this feat in less games would by my “push” and so I worked hard. 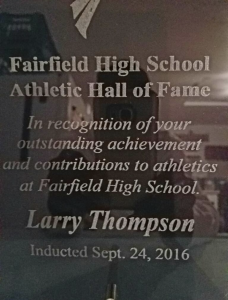 Let me fast forward to when I was playing football professionally. I constantly was talking to myself in the locker room before games and during half time. I would ask myself, “what are you going to do Larry?” As a receiver, I had the ability for many areas of recognition which included catches made, total yards and touchdowns. On this one day I would say, “I could easily do one, but maybe I could do another one,” referring to touchdowns. 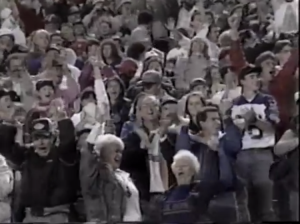 Fans cheering after one of my touchdowns (Image from highlight film)

As quickly as I talked to myself is as quickly, I would shut this off and then just talk to my teammates. This self-talk is the same thing I guess I started in high school my senior year when I wanted to break the 22-touchdown mark in a season.

Back to the story in high school- I talked to myself and made the decision. I was going to break this record! By the end of the year, I did it! 10 games and 22 touchdowns later, I accomplished my goal!

#2
After graduating from high school, I attended a 2 year JUCO school. I was a great player in high school but my athleticism and speed were the reasons why I excelled. This was also the case in JUCO, but I would have a wake up call at the next level. 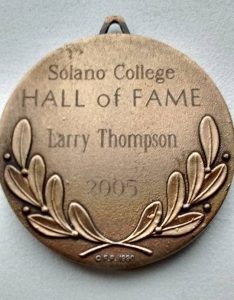 Interesting how I got into Solano College HOF 11 years before I got into Fairfield High School HOF.

At 19, I made my professional debut in the Canadian Football League. 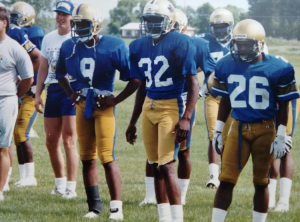 Though I was athletic and fast, I needed to learn a lot more as a receiver. While playing for the Saskatchewan Roughriders, Don Narcisse (also known as Narco) was the man that helped me a lot. For those of you who know Donald Narcisse, he was a great player. In fact, he holds the record for most consecutive catches with at least one reception in ever game (216) and was one of the top leaders in many categories like receptions, receiving yards and 1000-yard games in the CFL. Don Narcisse was a stud and he was one of my mentors. I remember one of the things he taught me was to cut off the defensive back and get on top of him. This was because of my speed that he shared this with me. I quickly realized that this technique was so valuable.  Instead of a defensive back being able to cover me on the right side or left side of me, it forced the defensive back to get in a position that made it more difficult for them to cover me. Don was a role model and teacher, but there were others too! 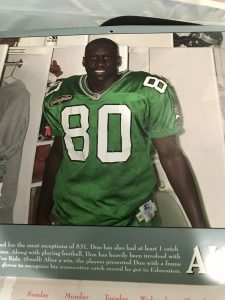 Here is a picture of Don Narcisse from the month of August in the 2nd Edition Saskatchewan Roughrider Calendar from 1998.

Dan Farthing was another guy who helped. I called him the “silent assassin.” 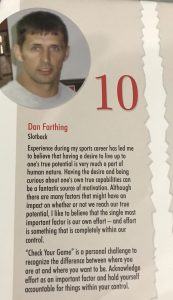 A picture of Dan Farthing and his interpretation of what Check Your Game meant to him. This was also taken from the 2nd Edition Roughrider Calendar.

I would secretly watch him and take pieces of what I saw of him and even guys like Doug Flutie’s brother, Darren! Darren was sneaky.  Very sneaky! I loved to watch the crafty ones, and I was soaking up as much as I could because I needed all the help I could get.

#3
My last story is about working hard, resilience and overcoming.  Before I left California to go and play for  Cal Murphy and the Winnipeg Blue Bombers, I made arrangements for a friend to rent my house while I was gone. I knew him pretty well, or so I thought. It seemed like a good situation getting rent money every month as well as my home was being cared for, but that was short lived.  Though I sensed there might have been a few red flags with this friend of mine, I never asked questions!  I was one that just kept to my own business.  I finished the season and went back to Fairfield (Northern California) where I lived.  I learned that not asking questions was about to be a living and learning the hard way experience.  At 3 am I got a knock on my door and when I saw from a window the group of men outside, I just ran as fast as I could as my house was getting sprayed with bullets.  In total, there were 72 rounds of bullet casings and out of those 72, 2 of them caught my body; my leg and my arm.  I felt lucky to be alive! 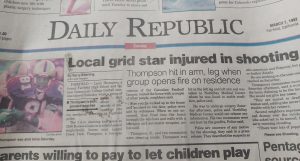 The shooters were never found.

Drugs were being dealt at my house while I was playing football and I was caught in the middle of it when coming home.  Though I had nothing to do with the choices of selling illegal drugs, my choice to not ask more questions was my fault.  One of the bullets that hit my leg, broke my femur and I had to take the year off from football  My 4.32 speed that I once had in JUCO would be hard to get back to, but I pushed myself.  I heard a bunch of “NO’s” when trying to get back in the league, but finally landed in Saskatchewan and played another 11 more years! 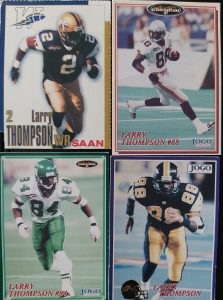 4 teams I played with in the CFL 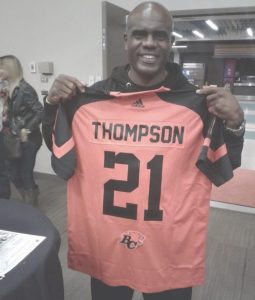 If you don’t feel right about something, pull yourself away from that situation, but at least ask questions. Looking back at different situations in my life, especially with my old roommate, I now realize that I should have been more curious! It's okay to ask questions and if it doesn't feel healthy or right, then just walk away.

In regards to athletics, I’ve learned so much. One thing is that there are 11 or 12 guys on the team and though you are just one of them, I'd say to others to figure out what they’re doing to help their team. Secondly, whatever it is you are good at, get better (in sports or in life). And lastly, athletics is like a puzzle. Figure out which piece of the puzzle you are, and then go be the best puzzle piece. That is called working as a team!

Larry, I appreciate you sharing some of your story. Although I learned a lot more from you after talking on the phone, I tried to get some good pieces of information in order to encourage others who might be in a similar situation as you once were. You were always a nice guy and great player when I knew you, but now I finally know why you would be quiet at times! You shared it with everyone. You were talking to yourself, motivating and encouraging yourself what you planned on doing! That's great. There are many who share a bunch aloud and we can understand them clearly, but it's the people like yourself that is a mystery at times. My memory of you as a player was that you were a good guy, worked hard and was always a deep threat! What is more important though, is that you are an overcomer. You took a few bad situations and turned them around. You were resilient and it shows by the span of your career. Whether or not you played 1 year or 12 years, your story is an inspiration to others. Thank you again for sharing and hope those in the Vancouver area get to know you and your business if they want to learn from someone of the great characteristics that you have in you! Thanks Gary

I've been there and done that! Other than the vast knowledge and experiences I share with my clients, it's my work ethic that helps my clients get to the top!

Our training works with a variety of people from Mother's, to athletes of all ages. We primarily serve the Vancouver, BC area as well as Northern California.

Hi Larry,
I just finished reading your story and watching the video…Brings back a lot of good memories of my time with the team… Glad to see you’re doing well, hope you and your family are safe in this crazy time… take care man… I’m still in Vancouver too, moved at the end of ‘95, just before I saw you and Burt Cummings in Metrotown.