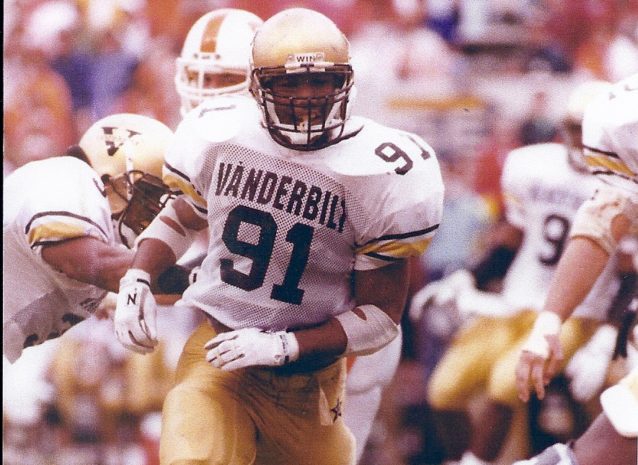 This story is about a subject that many people have to deal with and that’s the concept of TEAM. Find out how Louis dealt with this change in his position and how that allowed him to grow as a person.

My Check Your Game Story happened during my Senior year of college football at Vandy. It was the summer/preseason camp leading into the season and I was competing for a starting position as an outside linebacker. Even though I was one of the stronger players on the team, I was not slated to be a starter due to underclassmen that were bigger & faster than me. Half-way thru our camp, several of our interior defensive linemen suffered injuries that sidelined them for an extended period of time. Because we had no experienced defensive linemen to fill this void, the coaches approached me with an opportunity to play a different position and be a starter! Utilizing my strength and specifically my quickness, the coaches wanted me to play nose guard and use a hop technique to fill gaps and occupy blockers. After thinking about this for a day and realizing that I was probably not going to be a starter as a linebacker, I took advantage of the opportunity!
Needless to say, my first couple of games I struggled! It took me that long to figure out what my actual role was on our team. It was not my role to go out and make tackles, but to occupy blockers by sacrificing myself and allowing our middle linebackers to run freely and make plays! Once I figured this out and realized what I was supposed to do, I was able to focus on my technique and become more comfortable with the position. As it turned out, I eventually started making plays and the season turned into my best season of my college career!
What I learned from this experience is that when you’re on a team, everyone has role to play! It is almost impossible for every member of a team to be the superstar of the team. There are leading roles and supporting roles on every team. My role on our team was a supporting role, sacrificing myself so that others could do their jobs. This experience helped me to understand that being in a supporting role does not make me less important because the team will fail if all roles does not execute! This understanding of how a team should work has allowed be to be successful in many situations where I was working with a group of people, personally and professionally. I do not always seek to be the leader, but I will find ways to do things to help my team succeed!

Louis, I've always liked you. Even though you were quieter than others, I can remember how you led by your actions. You always worked hard in the weight room, on the field and I'm assuming in school(I wasn't as smart as you to be in the same classes!). Another thing I can remember is your respect for coaches and humility in life. Thanks so much Louis for your story and your humility and willingness to your football team to change positions for the betterment of everyone. I'm proud to call you a friend and teammate. Thanks again for your desire to help encourage other athlete's that might be going through similar circumstances as you had. -Gary Rogers