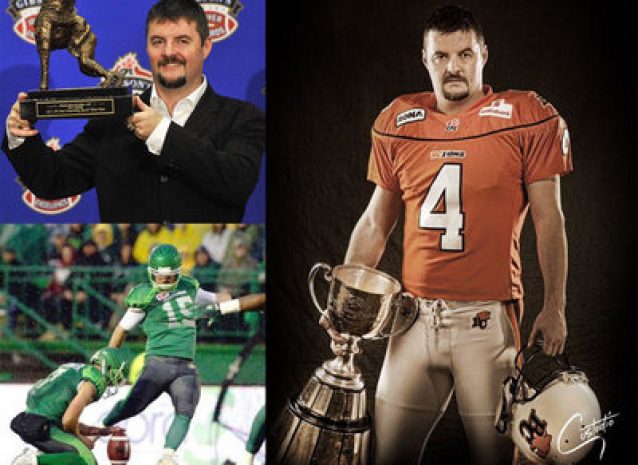 With over 24 years of playing professional football, Paul has some great wisdom for all. He shares a few things. First, about taking his job more seriously after he was released from a team, and secondly, he shares about being a role model to others.

When I graduated from High-School, my first few years in sports were interesting. I went from playing professional soccer in Europe, to kicking in the Canadian Football League the very next year. I then headed back to Europe, not to play soccer, but to kick in NFL Europe. I eventually landed back in the CFL the very next year where I would spend the next 12 years playing for the Saskatchewan Roughriders. Though I always worked hard and did a good job, I was being pushed out the door and eventually got cut in 2005. This was one of my most humbling moments as an athlete. The very next year (2006) I signed with British Columbia and this is when my Check Your Game moment begins to unfold.
I started to look at things in my life differently and get a new perspective. I was open to exploring different options and for the first time, I started taking my job more seriously and stopped taking it for granted! It was such an eye-opening experience being pushed out the door from my old team and I really wanted to prove that I was capable of even being better. I examined many areas in my life as an athlete and began to improve. My workouts were more intense and more specific. Instead of practicing like my old self, just kicking balls throughout practice, I would do much more. I worked on my strength and conditioning, did yoga for flexibility and overall put more of an emphasis on my entire body. I even would go through workouts with wide receiver Geroy Simon so that he could push me as an athlete. I wanted to be the best kicker and making these changes helped to do that. Just so you can understand the difference between myself in Saskatchewan and British Columbia, I’ll explain to you in a 1-10 chart. In Saskatchewan, I felt like I was just a 5 out of 10. After being cut, examining my life and making changes for the better, my number moved up to a 9!
I want to share one last story. I was playing for BC in 2006 and came back for the first time to play my old team, the Saskatchewan Roughriders. I was in pre-game warmups and on my way back to the locker room a security guy grabbed my arm and asked if I had a few seconds to talk. I oblige and as he speaks, his eyes are welling up, and tears running down his face. Although I didn’t remember the exact time or place or even exactly what I had said, this man goes on to tell me how I encouraged his son a long time ago during a camp. He continued telling me that his son was going through a rough patch and that nothing was going well both on and off the field. As professional athletes, we don’t realize the impact we have on others around us. I obviously was able to encourage this young boy enough for him to want to make positive changes in his life which led to him playing football at University. Be careful what you say or don’t say and always live as if others are looking up to you because they are!

Unfortunately, it seems that a lot of today’s athletes seem to be entitled. They don’t feel the need to pay their dues the same way when I first started. Just because you came from a certain college team doesn’t mean you’ve arrived. My advice is to earn your way and that’s done through hard work as well as making plays on the field.
Other advice I have is more for the kickers out there. When you kick a game winning field goal, you shouldn’t feel as if YOU won the game because really it’s your team that got you in a place for you to win or even lose. It’s a team sport. Some teammates may not think that way, but you need to think that way. No one player wins the game and no one player loses the game. Secondly, get confident in your ability. Don’t think, “I can’t miss this” because more than likely you will. It took me a while to get that focus and attitude.
Lastly, I remember watching a game on tv and saw this kicker who won the game after kicking a field goal and was running around like he just won the Grey Cup. I remember seeing him when we played him next and I thought it would be nice to give him a little advice. I told him he needed to stay focused. I said you can’t get too high or too low and that there was a long season ahead as it was only week #3. The response from this player wasn’t good. He brushed me off and didn’t want to hear anything I told him and 5 years later, he’s out of the league. Without acknowledging your weaknesses, you can never get better. Just be humble!
What was it like to be playing for almost 24 years professionally?
Towards the end of my career, I wasn’t afraid to miss, and nothing bothered me. If I was lining up to kick a field goal and guys were heckling me or if a coach called time out, I’d just enjoy the moment! As a kicker, it just allowed me more time to soak in everything on the field because we aren’t out on the field as much as other positions.
Which year in the CFL was most memorable?
One of the most memorable seasons I had took place in 2011 with the BC Lions. Even though we were 0-5 to start the season, there was no bickering or finger pointing and we just kept working hard. We all had the common goal to get better and we knew our team was good. We finally started to put things together and found a way to win on offense, defense and special teams. By the end of the year, we played so good as a team that we ended up winning the Grey Cup against Winnipeg at our home field by a score of 34-23. This was a great moment in time that I won’t ever forget!

Paul, thanks so much for sharing just a small, but powerful piece of your story through your many years of being a professional athlete. There aren't too many athlete's like yourself who have played so long. Everything you had to say was not only interesting but also encouraging for me and I know it will be for others too. What I thought was really interesting, and very common among athletes, has to do so much with humility! Whether or not an athlete has played one year, 6 years or 24 years like yourself, before we ever want to examine our lives and make big changes, there is a level of humility that many times needs to happen and that usually comes after we get hurt, get cut or some other situation that brings us to a low in life. The good thing about you though Paul, is that you still were able to continue play because as we both know, most others aren't so lucky. Even though you had some success while at Saskatchewan, there was a moment of humility when they pushed you out. You then took this time in your life to examine your life and to improve. You talk about the physical changes as well as mental changes you made. You took things more seriously, you changed your workout situation and overall improved your football skills and the results were great! You were able to continue your playing career for a lot longer which included one of your most memorable years as a player in 2011 with BC. Thank-you for sharing your Check Your Game story and for anyone reading right now, I'd encourage YOU to not wait to be humbled in life before YOU examine YOUR ways and get better, but to start RIGHT NOW! It's not easy to do, especially if good things are happening in your life, but act as if you were Paul when he was getting pushed out from his old team and quite possibly from his sport forever! Lastly, I'd like to say that my memories of you while at Saskatchewan were always good. I never thought of you as an overly confident player who thought he was any better than the rest of us. You were a good teammate and am proud to call you a friend. -Gary Rogers